The most effective measures to make efficiency improvements on pumping systems are less spectacular and do not create larger / major investments. Significant is rethinking, particular for those, who procure pumps. Nowadays it is not about the lowest pump cost price, but rather the economic decision in favour of energy-efficient pumps. This applies all the more in view of the fact that the purchase price of the pump only makes up 10% of total costs during its service life. More specifically, that means, under the assumption of increasing electricity costs, the necessary investments are going to redeem within a short period of time.

Through experience in four decades of plant engineering we know exactly which commercial and technical/ practical advantage (benefit) we can offer you, your company and ultimatley also your customers and this enables us to solve challenging tasks competent and sustainable, such as energy-efficiency and process safety!

Selection based on medium

Selection based on industry/ sector

Selection based on manufacturer

Selection based on type

From planning and interpretation to installation and commissioning your completed system, we accompany you during the project and serve you also afterwards competently and professionally!

To offer you a maximum of efficiency, economic viability and process safety, our systems are specially designed and tailored for your needs and circumstances. Besides installation and construction of your pump system, the fabrication of the corresponding switch box and system is possible.

Many of our pumps can be equipped with the optimal sealing system depending on requirement. From a very solid, cost-efficient system to an extremly durable magnetic seal – the respective application which supports the pump task best can be chosen. ???? Several factors are at play for the choice of optimal sealing systems: medium, pressure, requested service life, power consumption and costs of seal. We gladly advise you in order to get the best system for your application.

The application of mechanical seals in rotary pump construction is nowadays a standard performing. Mechanical seals have replaced stuffing boxes/ glands due to following advantages:

• Despite of small displacements and vibrations, the shaft is dense
• Mechanical seals are maintenance-free
• A low friction forms on the sealing surface and leads thereby to minimal power loss. No sliding of the shaft on the sealing component, consequently no damage by wear/ abrasion (low repair costs). 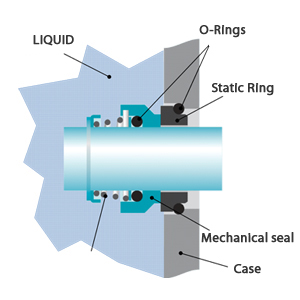 Composition/ structure of a mechanical seal

The so-called primary seal faces are pressed by means of a spring pressure as well as through pressure of conveyed medium. Between both sealing surfaces forms a lubricating film of fluid temperature, so that the mechanical seal is liquid-tight. The pump speed, the fluid temperature, the viscosity of medium as well as the axial forces influence the extent of the lubricating film. By evaporation of the conveyed medium to the atmosphere and the recirculation movement it is ensured that a permanent exchange of the conveyed medium occurs in the sealing gap.

At a single acting mechanical seal, a pump unit get seals by a slide- and counter ring. If the mechanical seal fails/ breaks down and thus a leakage into the atmospheric side arises, the conveying liqiud can reach the environment unhamperedly. Especially at dangerous, explosive or also at environmentally harmful/ polluting media there is no possibility to prevent the leakage in case of failure of the mechanical seal. 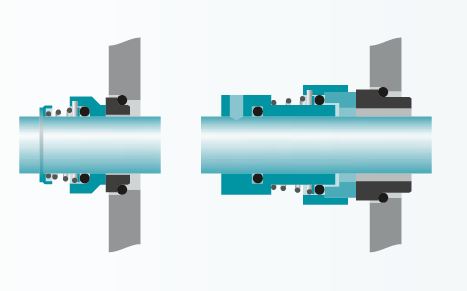 As soon as/ Once the service life of a single seal does not suffice due to wearing by solid particles or excessively high/ too low temperatures or pressures, double seals are used to protect surroundings, when toxic, aggressive or explosive conveying media is applied.

Tandem arrangement means, that two mechanical seals are mounted behind each other in seperated sealing chambers. A double sealing in tandem arrangement must be applied in combination with a quench liquid system, which resumes the following tasks:

The quench liquid always must be having lower pressure than the conveying liquid. A tandem arrangement always can be used when the operating method does not require an unpressurised back-to-back arrangement. 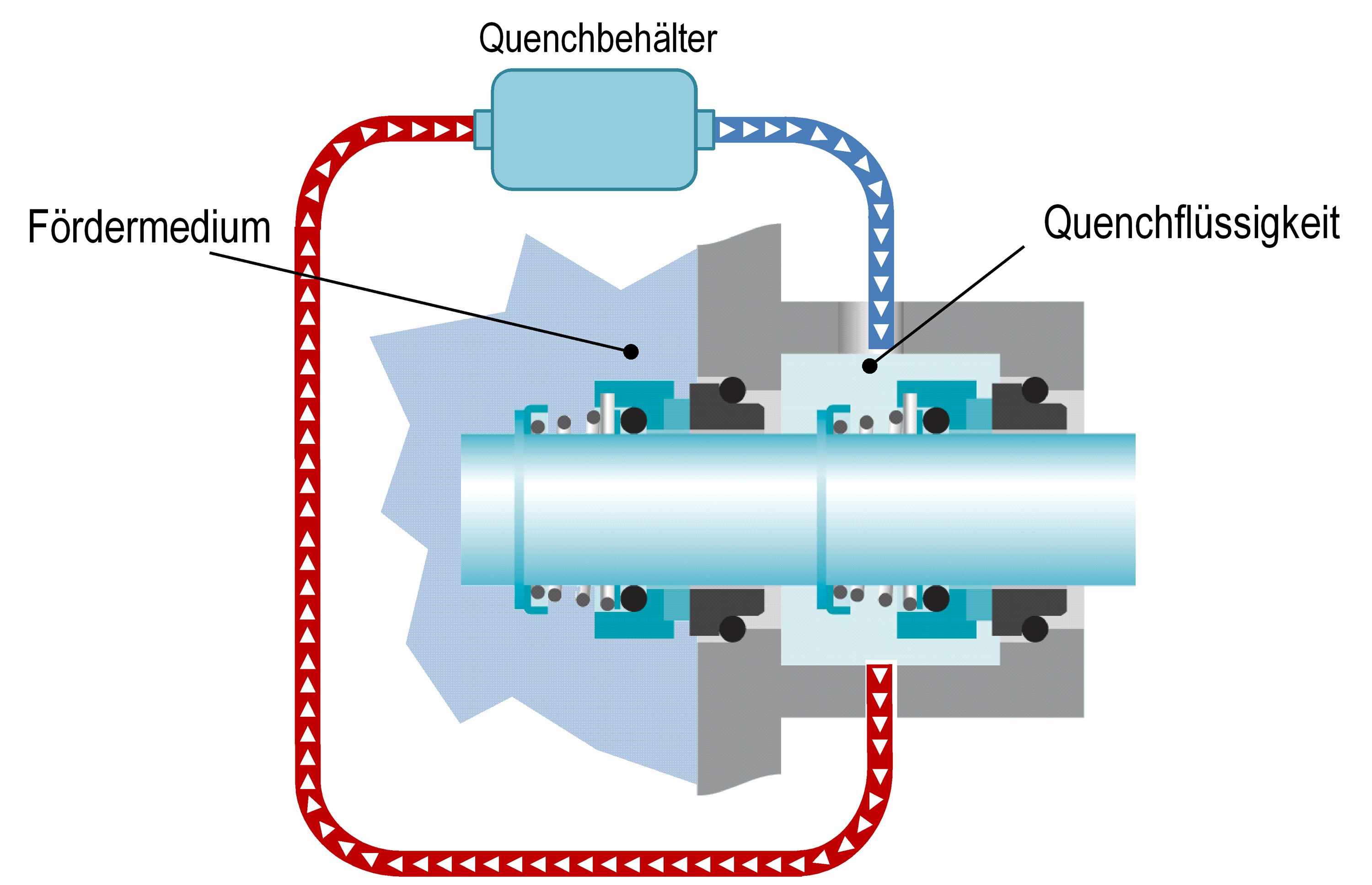 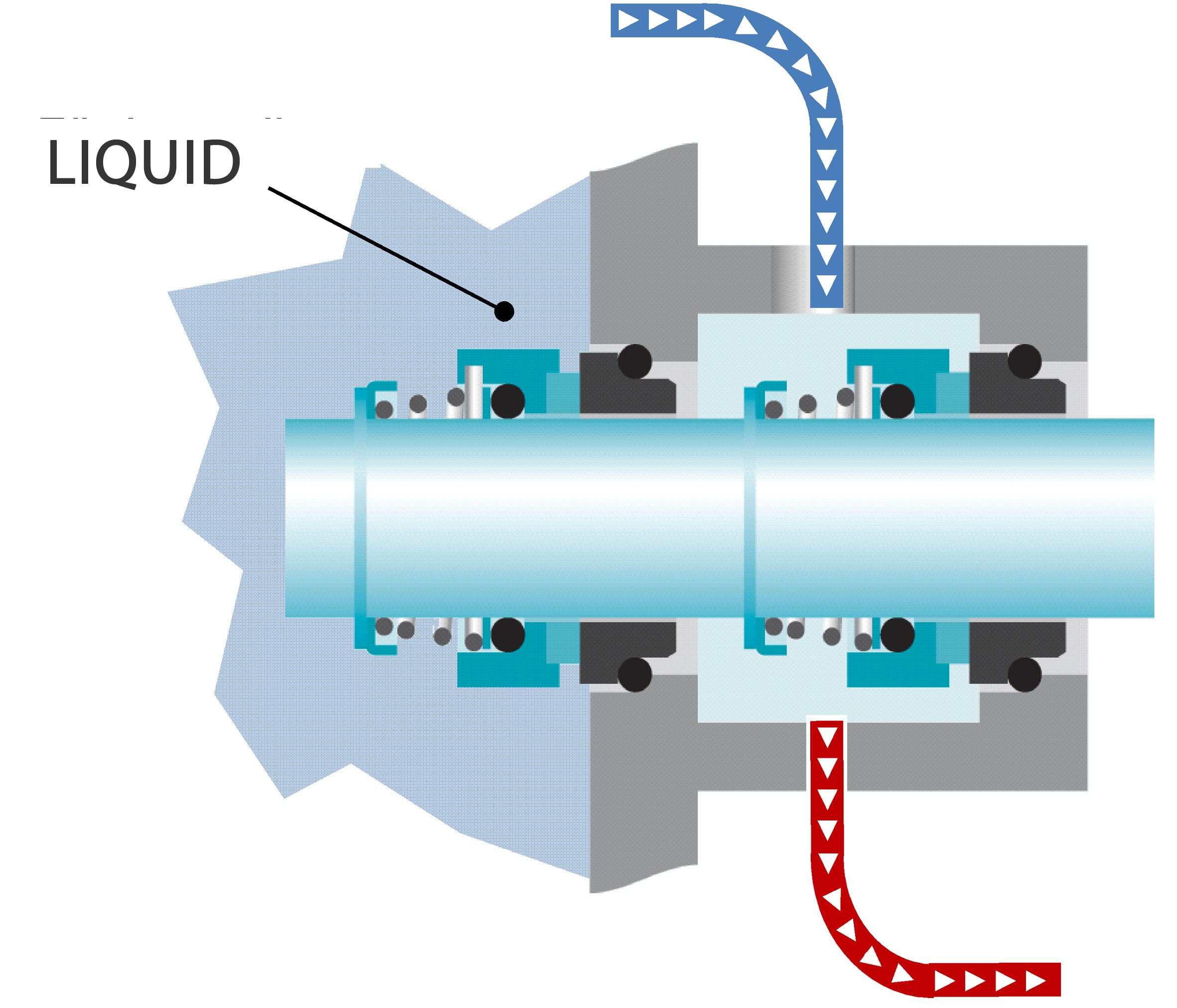 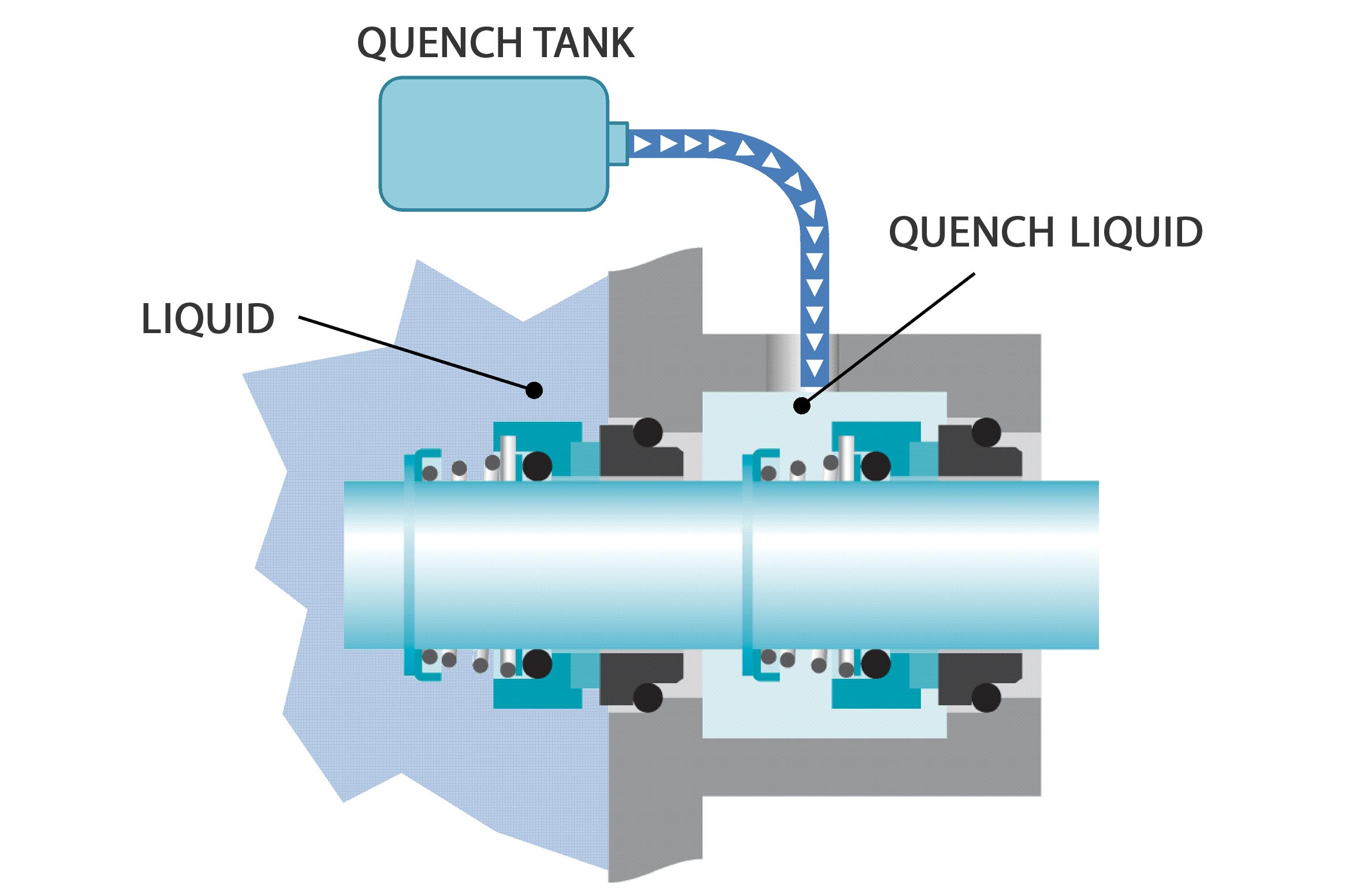 Hermetically sealed, contactless, wear-free, maintenance-free, high operational reliability, long service life! After the initial euphoria in the 90s and the subsequent stagnation, the magnet-coupled rotary pump has increasingly opend up new fields of application. Usually the shaft feedthrough is sealed by single acting mechanical seals, which exhibit a functionally leakage rate. This is in many cases neither requested nor permitted. Especially toxic, environmentally hazardous, and explosive conveying liquids need hermetic shaft sealing systems.

In many instances the solution is a magnetic coupling. Here occurs the power transmission not mechanically, but via a magnetic field: the outer magnet sits on the motor shaft, the inner rotor on the pump shaft. A can separates the pump interior from the atmosphere. The advantages of this sealing system are absolute leakage security, freedom of wearing and maintenance as well as high operational security. In this respect the magnetic couplings are not only suitable for critical media, also for high-temperature applications.

Many of our pump types are now also deliverable with magnetic couplings. On grounds of the modular system results a maximum of flexibility for the pump operator in regard to the pump configuration: 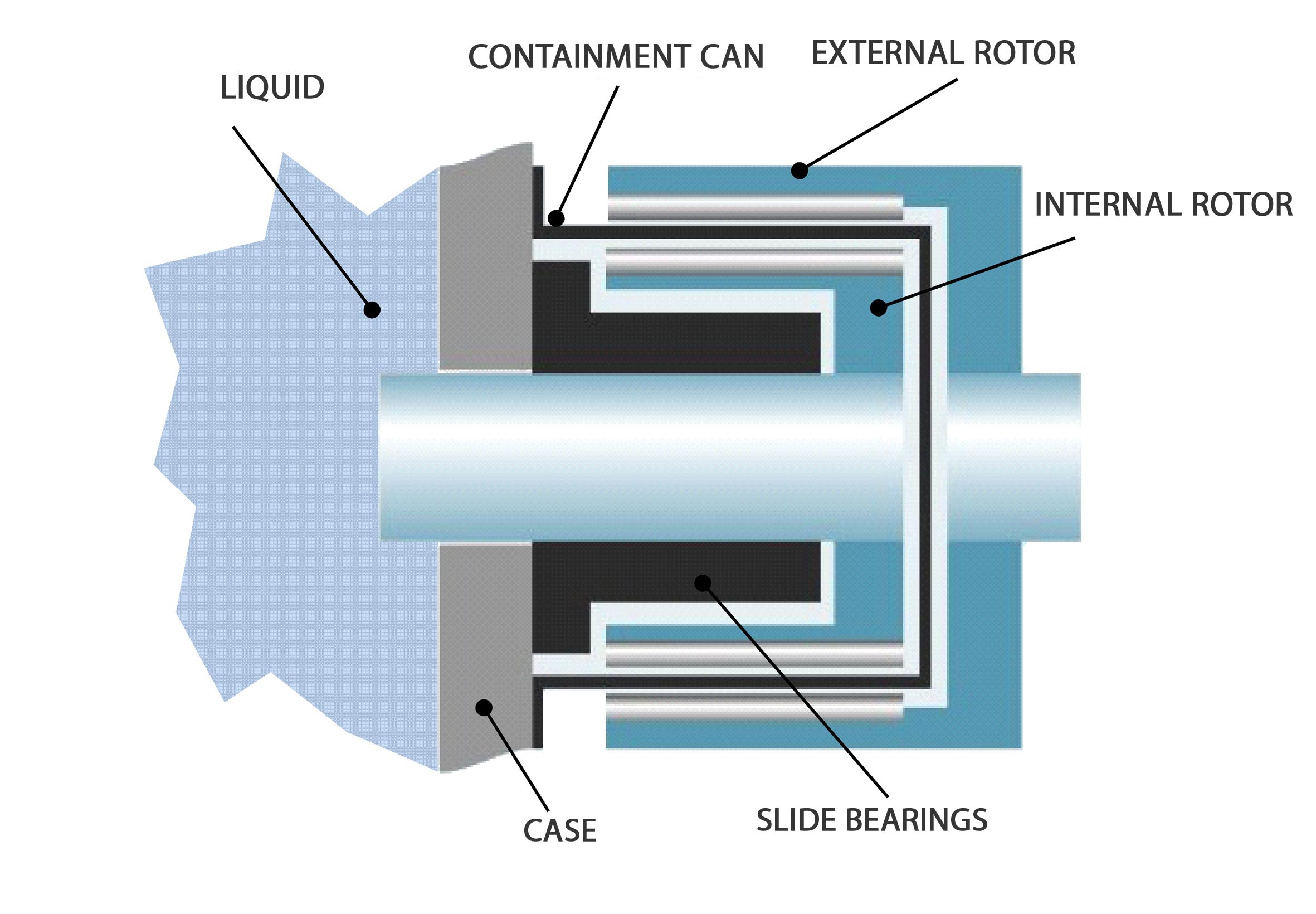 composition/ structure of a magnetic coupling 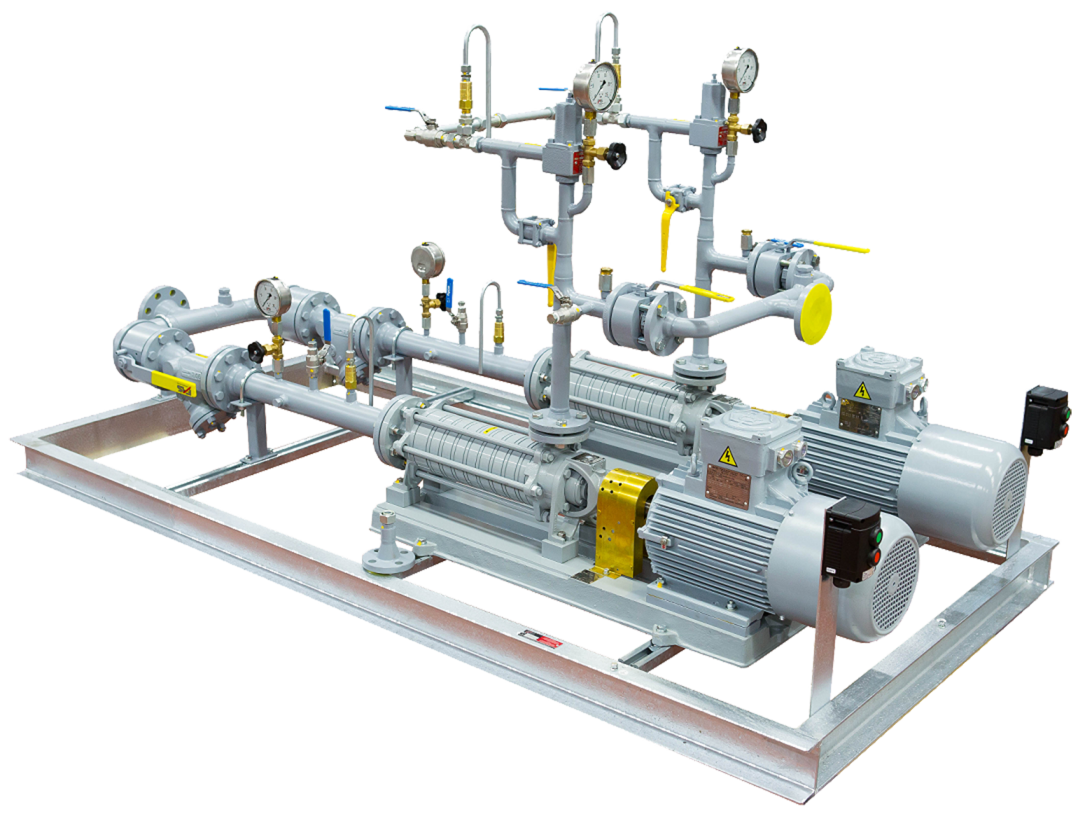